The Minotaur is a heavily armed battle ship. It features two triple-barreled laser turrets, six ion cannons for orbital bombardment, seven fighter bays (3 on each side and one in front) for its fleet of drone fighters, and a variety of smaller arms.

The Minotaur is 146 studs long (almost four feet), weighs 28 lbs, and intricately detailed both inside and out.

Click any of the images to see a larger image.

The Minotaur in orbit: 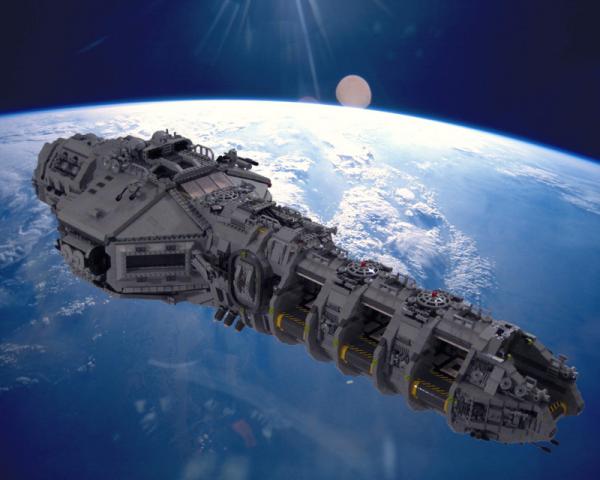 Some of my favorite angles: 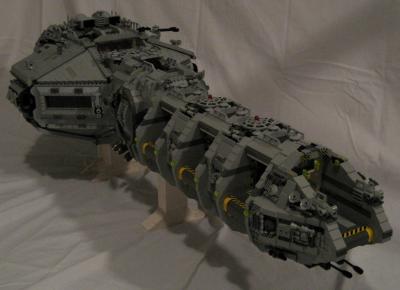 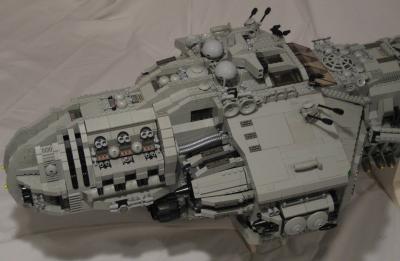 A closeup of the back: 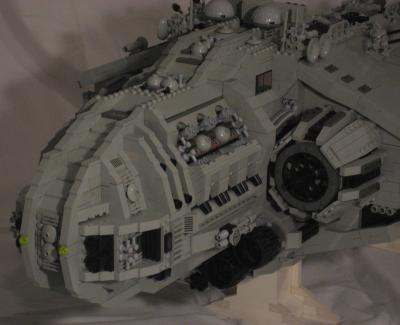 Another shot of the back, showing the engines: 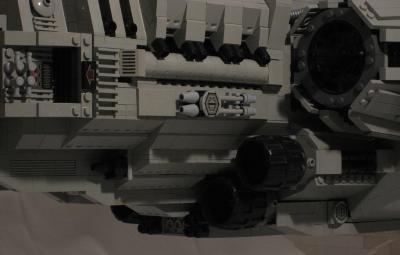 The Minotaur has fuel scoops to collect hydrogen for its reactors on deep-space missions: 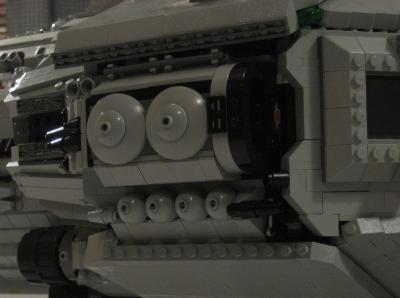 A closeup of the main guns: 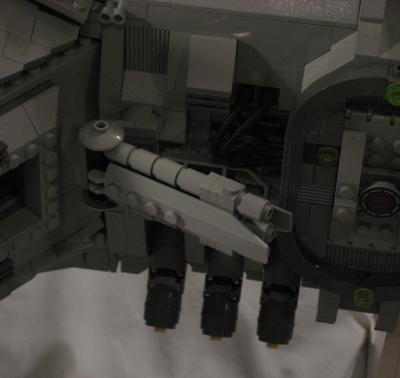 A closeup of the bridge. Those knobs disguised as greeblies (lower right) rotate the main guns: 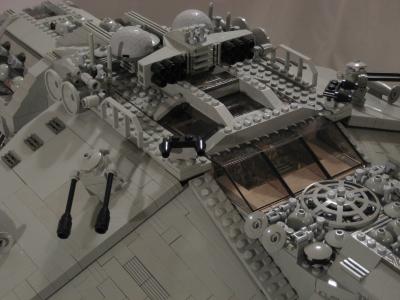 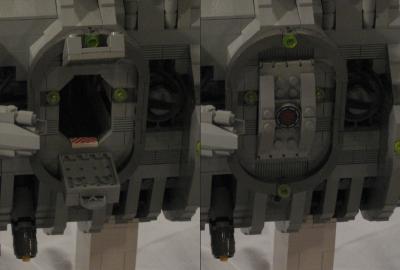 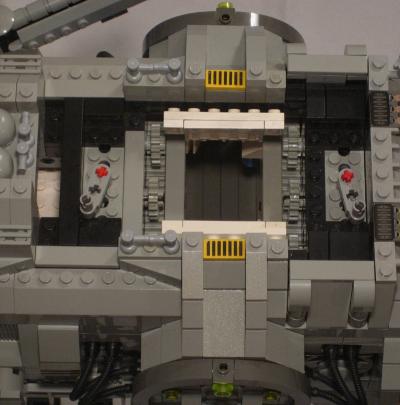 A couple of shots showing the interior of the bridge: 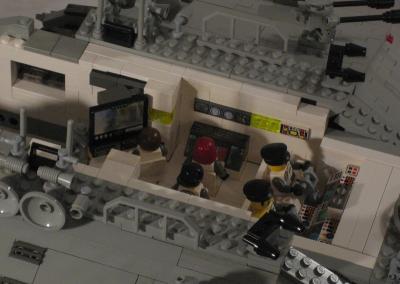 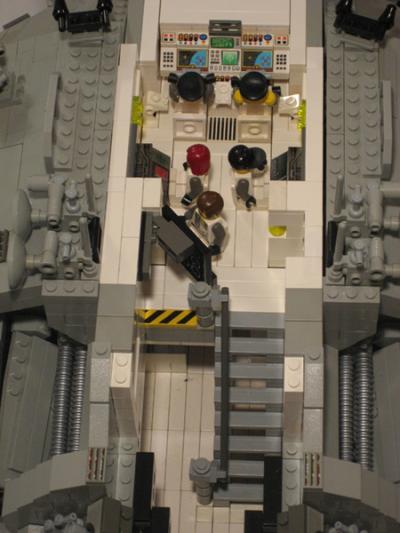 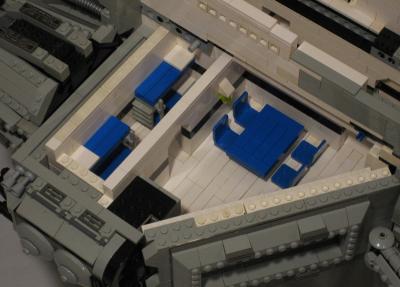 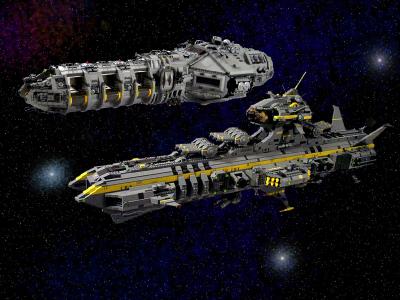 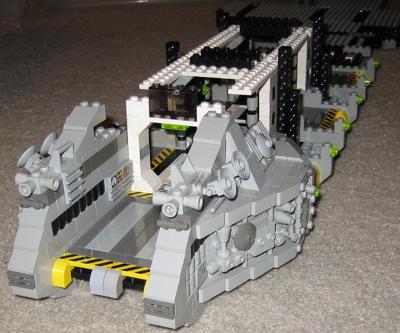 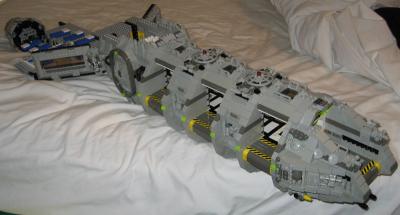 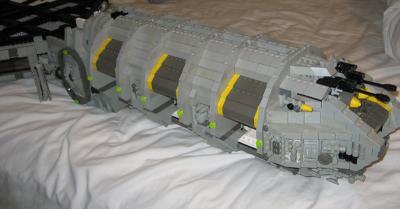 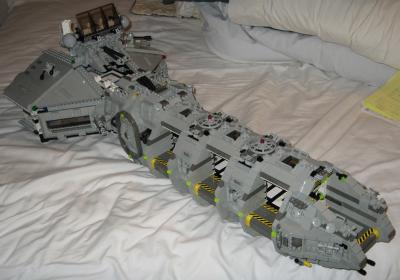 Comments:
Leave comment
Bill (from Seattle) January 13, 2009, 6:09 pm
Hey, I'm just getting into legos (at age 35!) and I'd like to build a "colonial 1" from battlestar galactica, and to scale with the mini figures. I'm wondering, how did you go about acquiring all the pieces that you need for your ships, such as the minataur? (which is awesome by the way)

thanks for any advice!
Anonymous March 2, 2009, 8:58 pm
awesome
Anonymous April 1, 2009, 8:49 pm
awesome ship dude its one of my favs!
lukashu35 June 3, 2009, 1:43 pm
dood ive seen your palidan ship if you could just combine them like have the palidin have hangers and those drone ships then it would kill anything i got 1 minute flat! lol keep up the good work
Tartakower (from Siwtzerland) June 12, 2009, 8:58 am
For sure one of the best lego spaceships (with Dan Jassim's explorer ^^ ) I've seen until then, keep going that way ;)
soren (from denmark) December 22, 2009, 5:20 am
Absolutely amazing, how do you purchase alle those bricks, i know you can collect sets, but you still have to win the lottery or so. Is it possible to by loose bricks on the intenet?
Blake December 22, 2009, 8:27 am
www.blake-foster.com
Thanks Soren! I purchased a lot of parts used on ebay. Bricklink is another great resource. You can get pretty much any part that has ever been made without buying an entire set.
george (from greece) January 8, 2010, 10:42 am
Hi there and happy new year !
Congratulations for your magnificent creation ... lego is a disease and if you "catch" it ... no one can save u ;)
I am trying to build a ship of my own but i have problems on using the right bricks on the right plan i have on my mind. Is there any program i could use for designing lego models and then make a list of the bricks needed to complete my design?
Thanx a lot and again congrats ! ;)
Master Shifu Leo J April 29, 2010, 5:39 pm
http://www.mocpages.com/home.php/13947
Insane amount of details! Complete with drone fighters!
Anonymous June 5, 2010, 6:40 pm
Halo line: For a brick he lands pretty good.
Wouter (from Belgium) September 12, 2010, 8:30 am
awesome!!!!
i'm 14 years and i like building with lego, but i havent that many blocks to make that kind of ships, they're really awesome
keep on the great work dude
CDLC October 10, 2010, 5:59 pm
http://www.flickr.com/photos/34580993@N08/
Everytime I hear the name Minotaur..I think of this, no kidding.
I wish my SHIP's would come to fruition like this one, I prefer Flickr to this website though... In general use of course, otherwise the website is pretty darn cool too.
Anonymous January 16, 2012, 3:36 am
Hmmmm? Delicous.
Teleq June 11, 2014, 7:51 pm
Really cool builds, do you use any type of design software to build create these amazing ships I mean the size awesome. well Good luck with your lego designs.
James M. (from Tacoma, WA) September 28, 2014, 2:09 pm
http://mocpages.com/moc.php/397246
Hello Blake, You do awesome/amazing work. How do you Plan your ships and figure out if you have enough pieces? I have a cool little spacefighter I made, and I trying to Plan a carrier/warship for them which will hold 8 + a troop shuttle for it. I would appreciate any advice thanks.Aspiring S.H.I.P. builder.
Blake September 28, 2014, 6:54 pm
www.blake-foster.com
Thanks for the comment! When I build a model of this size, I inevitably don't have enough pieces, or at least not enough of the right pieces. I go to Bricklink for that. Sorting helps a lot, since it's easy to notice when you're low on a particular part. It's impossible to anticipate exactly the parts you'll need, but you can it least safely assume that you'll need a lot of basic bricks/plates in certain colors, and parts for greebly bits. As long as you have enough of the high-usage parts to keep you going you shouldn't be stalled waiting for Bricklink too much.
Home | Research | Electronics | Programming | Legos | Music | Art