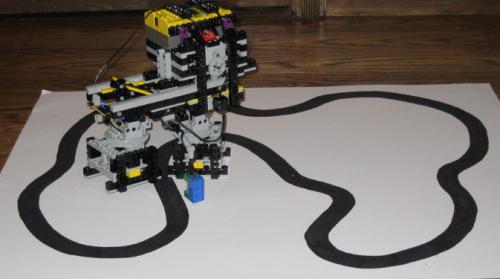 The robot steps by rotating on one foot while the other foot is lifted off the ground. It uses three motors, one in each foot to drive the rotating bases, and one to shift the RCX from side to side (thereby shifting the weight from one foot to the other). The feet are lifted by rubber bands. When the RCX slides over the top of a foot, it pushes the foot down. That foot touches the ground just before the center of gravity shifts to that side. Shortly thereafter, as the RCX continues to slide across, the other foot is released. The rubber bands lift that foot, allowing the bot to rotate on the base of the foot that is now taking the weight. It rotates until a light sensor on the front crosses the dark line, and then repeats the process on the other foot.

A simple animation of the mechanism:

Here's a video of it in action: